An autumn day at Sunnybrae 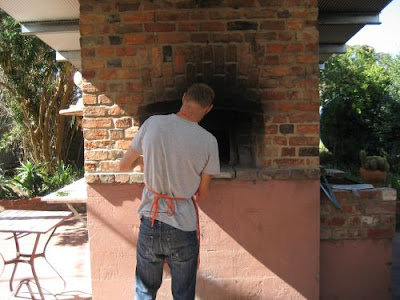 Our first wedding anniversary was in late March. To celebrate, Nathan decided to actually listen to my complaining for once, and booked us in for a weekend lunch followed the next day by a class at Sunnybrae restaurant and cooking school in Birregurra.

George Biron reopened his cooking school/ restaurant a year ago, after having being closed for 9 years. I am not old enough to have been in the old days, but I had read enough on his blog and by other food bloggers to know that he cooks my kind of food. His emphasis on using local produce, as well as growing his own vegetables (including olive trees from which olive oil is made, a bee hive, and in the future some oak trees with truffle spores!) struck a chord with Nathan and I and our crazy garden experiment, so it was with great excitement that we headed to Birregurra for the weekend.

And what a glorious autumn weekend it was. Wonderful sunny days filled with food. I really could not ask for more! We had a lunch booked for the Sunday and a class on the Monday… 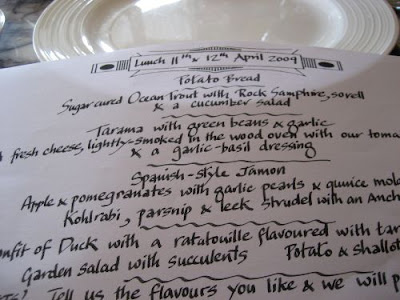 The menu at Sunnybrae is mostly a set menu with very few decisions, starting with an individual entrée, two shared entrees, a main and a dessert, punctuated throughout with the fabulous potato bread. Decisions can be made on the main, and dessert. And at 66 dollars, I consider this an absolute bargain! We were eating from 1230-430ish, punctuated with a couple of walks around the property to build up more room for the next course, and to check out how the vegetable garden was going. This is such a lovely way to spend a Sunday, relaxing and eating and talking with friends and/ or lovers. 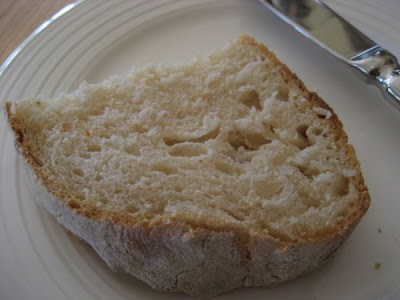 When we were travelling in Europe, Nathan had a saying – ‘you can tell how good a restaurant is by the bread they serve’. This potato bread was just beautiful. And we made it the next day at the class. And then Nathan made it the next weekend. Nath made three loaves! So we must have liked it. Nathans version was a rye based version, but George’s white potato bread was crusty yet soft inside, and though not officially a sourdough, had some sour taste and a nice structure.

We had chosen a local pinot noir to drink with lunch and it was perfect for the food – not too strong in flavour – it supported the food rather than overwhelmed it.

As for the food, I won’t go through each course as I did forget to take photos of everything. I did love the use of edible succulents though, such as in this garden salad. 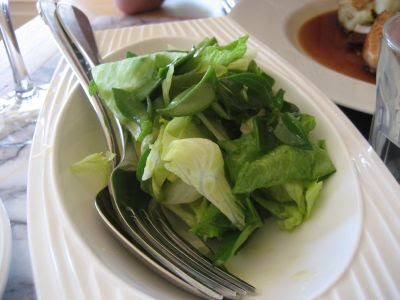 And Nathan (in the middle of a weird succulent obsession at the moment) did get a cutting of this succulent which is doing well in a pot at home. 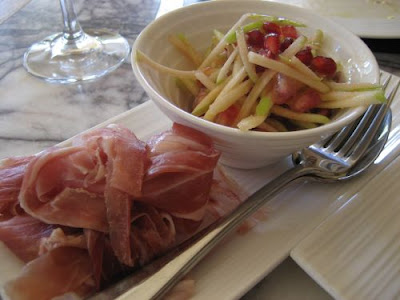 Seasonal use of pomegranates which I am loving at the moment at home too. And the jamon in this dish was spectacular. 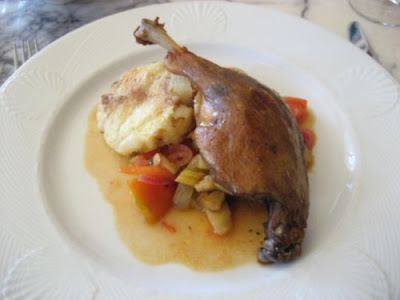 Comfit of duck with ratatouille 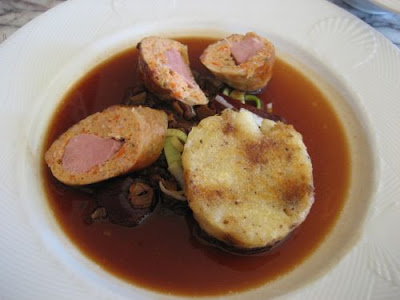 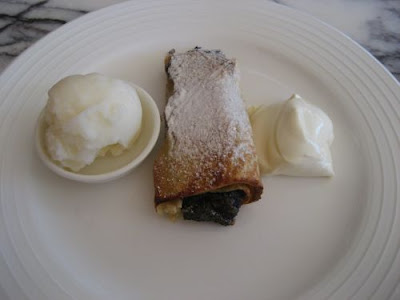 The food at Sunnybrae involves fresh seasonal produce with simple, fresh flavours that really highlight each ingredient. The use of fruit gelato in the desserts was inspired (and I am jealous of the big ice cream maker he has in the kitchen).

We were seated facing the garden and light was streaming into the dining room. A large book case full of cook books made Nathan a little uncomfortable as he saw me getting excited about all the books (he has currently banned me from buying any more cook books until I start using the ones I have more). 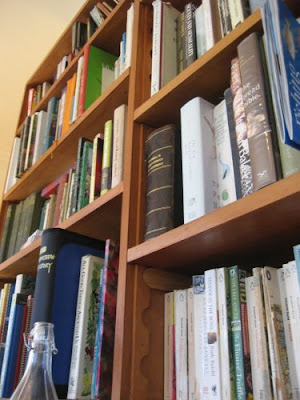 We did not need dinner after this lunch. We stayed the night at nearby Forrest, which is in the Otway’s national park area, and has the delightful Lake Elizabeth – home to platypus and other wildlife. There are also 50km of mountain bike trails which we are yet to sample but another trip to this part of Victoria is definitely on the cards, and not just to eat at Sunnybrae again!

The next morning we were back at Sunnybrae at 930am. George made us an expresso and we were introduced to the other folk taking the course that day. It was great speaking to other people who were basically all there because of a love of food.

The class involved making a 4 course lunch which we all ate together at the end of the class. We started with the bread in order to give it enough resting time. George also showed us how he made his tomato passata using tomatoes from his vegie garden, and some preserved cumquats. The class involved George taking us through the techniques but sharing out the actual work which was a good way to try out what he was saying and to build camaraderie between the participants.

We were also directed to plate our own courses in order to get a feel for presentation. I think mine needs a bit more work…

Though the star anise cured ocean trout was beautiful and well matched with an apple and green pawpaw based salad. 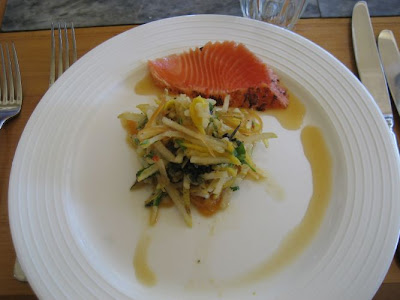 The wood fire had been lit the night before and the oven was at the right temperature for us to bake our potato bread- enough loaves for us to take one home and to eat one with our shared lunch that day too. 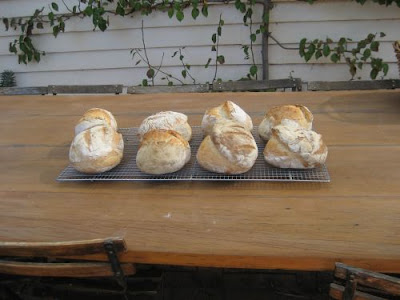 Again I did not take photos of everything, though we also made a mussel and blue eye stew, a rabbit stew served with a rice pilaf (the rice pilaf was the winner with us and we have been making it at home since), and dessert, a bay leaf scented rice pudding, which I think I plated up a bit better… (and I was impressed with my sugar burning attempt too)… 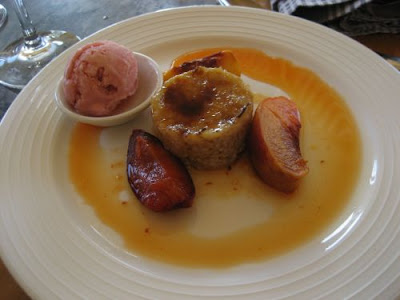 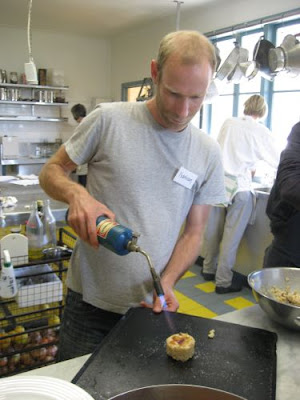 And amusingly enough it involved a rather large blow torch (now that we have a small one at home after I complained against the use of large propane burners in the kitchen!).

I spend a lot of my time thinking about food, reading about food and cooking, but I did pick up a lot of tricks from George during this class, and it was good to use unfamiliar ingredients. I had asked George if we could cook game in the class as I have an un-based fear of cooking unfamiliar meats. Since this course I have cooked up a rabbit at home so it did help. Nathan especially picked up some good ways of shaping bread (Nathan being the master bread maker in our household) and we are super jealous of the wood fired oven.

The class is wonderfully informal, and I asked many questions during the day on anything I could think of. Eating the food with some wine and some conversation at the end of the class is a great way to end it. I think I will be back to Sunnybrae during truffle season! And maybe in asparagus season, there was a very impressive asparagus bed in the garden which I am a bit jealous of. Thankyou to George, Angela and Di for a great weekend.
Posted by Ran at 10:06 AM

Having just eaten there, I have to concur with everything you said. It's definitely worth a detour (or special trip). The potato bread was fabulous and it was hard to refuse the many offers, there were a lot of courses to get through! We'll be back too.

Sounds wonderful - what a great way of celebrating your wedding anniversary!

I visited your site and found it very interesting. I appreciate the way you talk about food and do the reviews on restaurants. With this, I'd like to give a $10 discount voucher to your site which your visitors could use in their take-away orders placed on Menulog (from 500+ restaurants Australia-wide). All they have to do is just type the voucher code (which I will provide you upon response to this message) at the check out.


We bumped into your blog and we really liked it - great recipes YUM YUM.
We would like to add it to the Petitchef.com.

We would be delighted if you could add your blog to Petitchef so that our users can, as us,
enjoy your recipes.

Petitchef is a french based Cooking recipes Portal. Several hundred Blogs are already members
and benefit from their exposure on Petitchef.com.

To add your site to the Petitchef family you can use http://en.petitchef.com/?obj=front&action=site_ajout_form or just go to Petitchef.com and click on "Add your site"

Hello!! My name is SIMAUMA. I write blog about the food.Please look.And I am glad if I link to your blog. (URL)http://food-collection-simauma.blogspot.com/

This sounds wonderful! A great way to celebrate any occasion, right?

Great blog, well written and quite engaging. Keep it coming!