I have been quite tardy with the posts. Life seems to get in the way sometimes doesn't it? My apologies to my small readership ;)
I have been meaning to do a series of posts on my experimentations with kangaroo. Up until recently, my cooking with this native meat of ours was limited to the BBQ and spaghetti bolognaise and lasagne (which I have blogged, see recipe index). All fine recipes and a good substitute for other meats. Lately though we have been trying to think more about hip and up to the minute topics such as food miles, and sustainability. We could never be vegetarians but we are not the typical Aussie type who needs meat in every meal. I am happy with some sort of animal product once or twice a week. If my body needs more it lets me know through cravings.

It seems crazy that we are still farming beef and lamb, which may work in the European countries, but in this tougher land of ours, makes little sense in terms of farming practise in Australia, esepcially in the drought. These ruminant animals with their hooves rip up our topsoil and their four stomachs leads to copius methane production. They require large amounts of water, directly and indirectly through feed. With a figure of 25% of our emissions being due to our four legged friends, at home we really started to feel that this type of meat should be a luxury or once in a while thing, rather than a weekly part of our shopping list.
Kangaroo, on the other hand is a relatively soft-imprint-on-the-land meat. Being mammals they do not produce methane, and are very light on the ground. Moreover, it is very hard to farm kangaroo, but much of our inland pastures are full of these transient creatures (which anyone driving at dusk in country victoria quickly finds out). The method of killing kangaroos, is considered humane - shooting (though is killing any creature ever 'humane'). There are estimated millions of roos in inland Victoria and NSW, and the farming requirements are pretty much nil, apart from needing liscenced shooters to kill them.
Apart from these 'lofty' reasons for eating roo, the mince is supercheap ($6-7 a kilo) and the fillets and steaks are comparitive to other meats. And importantly, they taste great, are low in fat, keep well in the fridge and are high in iron.
Having said all this, my mother would never touch it, considering it a 'dirty' meat and I think this perception is quite prevalent in Australia, probably due to years of kanga mince being sold as pet food. My understanding is that all kanga meat for human consumption is triple checked and export grade (which domestically sold cattle meat is not).
On to the recipes. The easiest way to eat kangaroo is to BBQ it! It is a lean meat though, so should be coated or marinaded in oil and whatever other flavours you like so that is doesnt burn. This is the mariande I most often use, but any other spcies or herbs may be used.
BBQ marinade
Olive oil
garlic
native or other pepperberries, crushed
lemon myrtle
parsley
Mix ingredients and coat kangaroo fillets for at least an hour. Bring to room temperature before grilling. Cook for 3-4 minutes per side, depending on the thickness, rest for 5 minutes, season, and enjoy. Do not overcook, this really does need to be medium at the most. Lemon is also very good in the marinade.
The picture below shows a meal I made for myself one night. I made a quick mushroom sauce with the steak and instead of potato mash i made cauliflower and parmesan mash, which was beautiful. 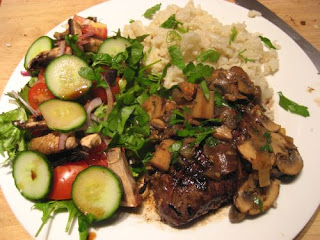 Shepherds pie and variations
Kangaroo mince goes absolutely beautifully in shepherds pie. I use this recipe with modifications. One is that I obviously use kangaroo mince, the other that i had a spoonfull of vegemite and of curry powder to the mince. The shots below show two different accompanying salads. One was a grated carrot salad which is a staple in this house, and the other was a salad that involved some cherry truss tomatoes, roasted. 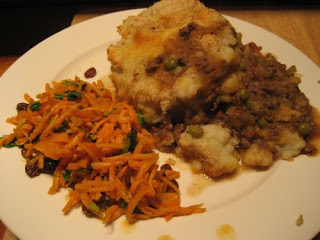 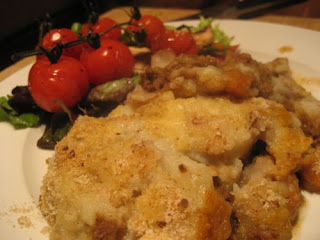 I have also experimented with topping with a pumpkin/ potato mix mash and this is just lovely. There needs to be at least one potato in the mash or else it is too runny, but this can always be fixed by adding breadcrumbs. 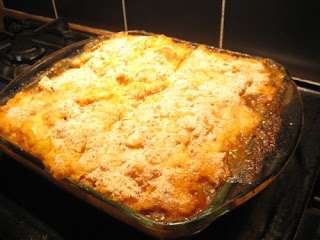 I have also made a kangaroo stew. I used home-made chicken stock and seared the kanga before adding it to the mix. The stew doesnt need to be cooked for too long with the meat, but after 40 minutes, I found the meat was still tender (which can be a worry when cooking kangaroo due to its lean-ness) . I wont include a recipe as most people have a stew recipe they use. 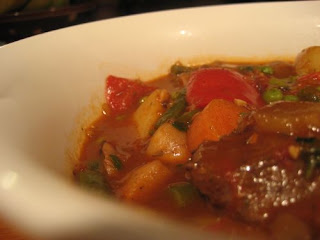 Arabic Mousakka
I didnt know what else to call this dish. It resembles a Mousakka, but contains no bechamel or cheese, and is served with rice.
2 eggplants, sliced
onion
1kg mince
tomato paste
salt, pepper, mixed spices
pinenuts
2 potatoes sliced
2 tomatoes sliced
parsley
Firstly, grill or fry the eggplant slices 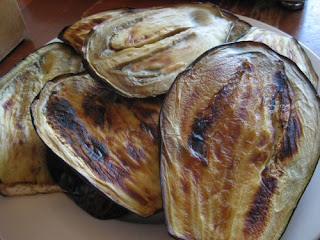 Brown the mince with onions and garlic and spices (mixed spices are good) until cooked and add parsley and pinenuts.
Lightly grease a baking dish. Arrange potato slices in one layer at bottom of dish. Top with one layer of eggplant slices. Place cooked mince on top of each eggplant slice and then top with another eggplant slice (like a sandwich). Top eggplant with tomato slices. Dilute a couple of tablespoons of tomato paste into enough water to just cover the dish contents. I also added a tin of tomatoes to the top, but this is not really necessary. Bake in oven for 30-40 minutes or until bubbling and fragrant
Serve with rice and salad 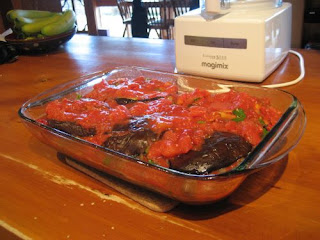 I have also been using Kangaroo fillet in Chinese style cooking, which tastes great! The quick stir-frying technique works really well for kangaroo and I have tried many different variations and haven't been dissapointed yet! More recipes to come in part 2... enjoy
Posted by Ran at 1:23 PM 2 comments: