Happy New Year to all! Hope the break was restful, not too stressful, and full of fabulous food… and unlike me eaten in moderation ;)

I finally have a chance to finish off my posts about kangaroo. Over the break we were fed many other types of meat and different functions and I struggled to eat them as they seemed so much heavier than roo. I was nice to come home and have a simple BBQ of marinated roo and salads made from vegies from the garden. More to come on our lovely garden and the vegetables it had waiting for us after 10 days away.

The following pictures are of stir fries I have made several months ago so I won’t endeavour to put up exact recipes. To be honest it would be guessing anyway, as I never follow recipes for my stir fries anyway. As long as the basic principles are followed, tender tasty roo should be the result. I have used both the fillet and the steak that are available from supermarkets in Australia, and while the fillet is marginally better, there is not a noticeable difference.

I found Kylie Kwong’s ‘Simple Chinese cooking’ to be a great resource for simple stir fries and techniques and now use it as a guide only. The basics need to be there – good seasoned wok, peanut oil, metal spatula, very short cooking times and never overcrowding the wok. I also find marinading the meat, particularly for roo which is very lean, to be important.

This dish was a black bean based roo dish. I used Lee Kum Kee Black bean and garlic sauce, which I used to marinade the meat in (mixed with soy and sesame oil). Any vegies you like can be used, cook the meat first for about 1.5 minutes, in batches until seared but tender. Remove meat, then fry vegetables, again in batches and not for long. Return all ingredients to the wok and pour over a sauce made with black bean, soy and sugar. This dish is repeated often in our house as it is so quick and tasty. 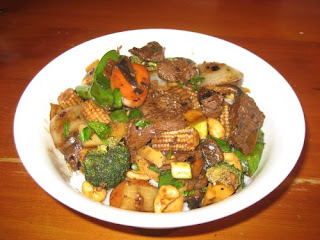 This extreme close up is of my take on sweet and sour kangaroo. The sweet was in the form of fresh pineapple and the sour from the sauce based on lemon, malt vinegar, sugar, garlic, ginger and fresh tomatoes. Coriander is a good final addition, and again, marinade the meat in either the sweet and sour sauce or just some soy/ vinegar/ water/ cornflour mix. The meat I sliced very thinly across the grain. I found the meat broke up a little in this dish, I may have over marinaded the meat, but Nathan liked the texture of the shredded tender meat. 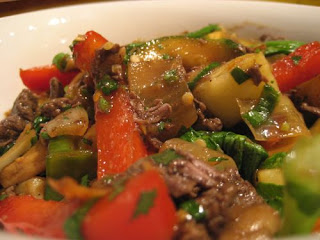 This was Sichuan salt and pepper roo, served with steamed Asian veg, rice and pickled radish from the yard. This was an absolute winner. I used the recipe for Sichuan beef from Kylie Kwong and served the Sichuan pepper and salt separately so everyone could put as much as they liked. The meat was super tender and as it had been stir fried on its own, really quick. 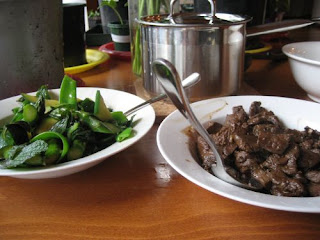 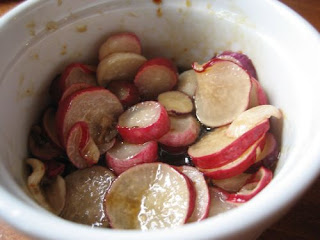 The pickled radish was pickled in salt and sugar for 40 minutes, the liquid drained and then tamari and sesame oil sprinkled over the top. I have done this with daikon too and I absolutely love it.

If you would like more specific recipes for the sauces, leave a comment but the idea is to make the sauces to taste with whatever you have on hand. I just love the versatility of Kangaroo; so far I haven’t made a bad dish with it.

And no I do not work for a Kangaroo meat company ;)
Posted by Ran at 1:48 PM No comments: